I don’t offer “investment advice” here at JOTM so I have not commented much on the recent action of the market lest someone thinks I am “predicting” what will happen next.  Like most people, predicting the future is not one of my strengths.  I do have some thoughts though (which my doctor says is a good thing).

Instead of talking about “the markets”, let’s talk first about “investing”, since that is really the heart of the matter.  “The markets” are simply a means to an end (i.e., accumulating wealth) which is accomplished by “investing”.  So, let me just run this one past you and you can think about it for a moment and see if it makes sense.

*30% invested on a buy-and-hold basis

30% Buy-and-Hold: Avoid the mistake that I made way back when – of thinking that you should always be 100% in or 100% out of the market.  No one gets timing right all the time.  And being 100% on the wrong side is pretty awful.  Put some portion of money into the market and leave it there.  You know, for all those times the market goes up when you think it shouldn’t.

30% using trend-following methods:  Let me just put this thought out there – one of the biggest keys to achieving long-term investment success in the stock market is avoiding some portion of those grueling 30% to 89% (1929-1932) declines that rip your investment soul from you body and make you never want to invest again.  Adopt some sort of trend-following method (or methods) so that when it all hits the fan you have some portion of your money “not getting killed”.

10% whatever:  Got a hankering to buy a speculative stock?  Go ahead.  Want to trade options?  OK.  Want to buy commodity ETFs or closed-end funds or day-trade QQQ?  No problem.  Just make sure you don’t devote more than 10% of your capital to your “wild side.”

When the market is soaring you will likely have at a minimum 60% to 90% of your capital invested in the market.  And when it all goes south you will have at least 30% and probably more out of the market ready to reinvest when the worm turns.

The Current State of Affairs

What follows are strictly (highly conflicted) opinions.  Overall sentiment seems to me to be very bearish – typically a bullish contrarian sign.  However, a lot of people whose opinions I respect are among those that are bearish.  So, it is not so easy to just “go the other way.”  But here is how I see the current “conflict”.

From a “technical” standpoint, things look awful.  Figures 1 and 2 show 4 major market averages and my 4 “bellwethers”.  They all look terrible.  Price breaking down below moving averages, moving average rolling over, and so on and so forth.  From a trend-following perspective this is bearish, so it makes sense to be “playing defense” with a portion of your capital as discussed above. 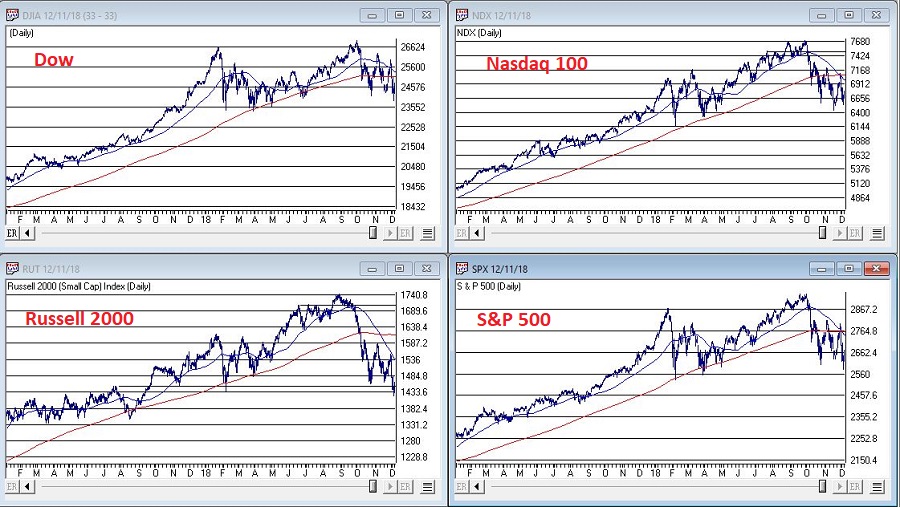 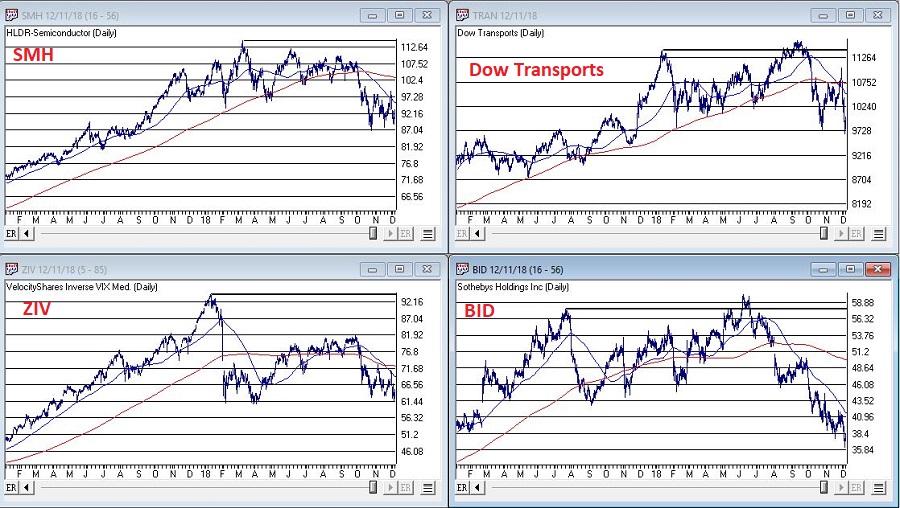 On the flip side, the market is getting extremely oversold by some measure and we are on the cusp of a pre-election year – which has been by far the best historical performing year within the election cycle.

Figure 3 displays a post by the esteemed Walter Murphy regarding an old Marty Zweig indicator.  It looks at the 60-day average of the ratio of NYSE new highs to New Lows.  Low readings typically have marked good buying opportunities. 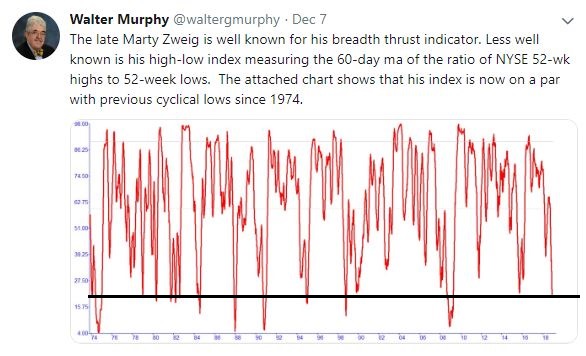 Figure 4 displays the growth of $1,000 invested in the S&amp;P 500 Index ONLY during pre-election years starting in 1927.  Make no mistake, pre-election year gains are no “sure thing.”  But the long-term track record is pretty good. 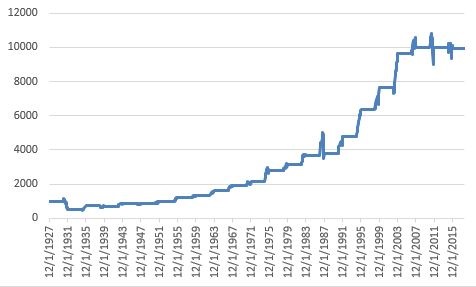 Too many investors seem to think in absolute terms – i.e., I must be fully invested OR I must be out.  This is (in my opinion) a mistake.   It makes perfect sense to be playing some defense given the current price action.  But try not to buy into the “doomsday” scenarios you might read about.  And don’t be surprised (and remember to get back in) if the market surprises in 2019.

Disclaimer:  The data presented herein were obtained from various third-party sources.  While I believe the data to be reliable, no representation is made as to, and no responsibility, warranty or liability is accepted for the accuracy or completeness of such information.  The information, opinions and ideas expressed herein are for informational and educational purposes only and do not constitute and should not be construed as investment advice, an advertisement or offering of investment advisory services,

Successful traders have a detailed personal trading process that is executed in exactly the same way all the time.  Get started on yours. FREE guide.